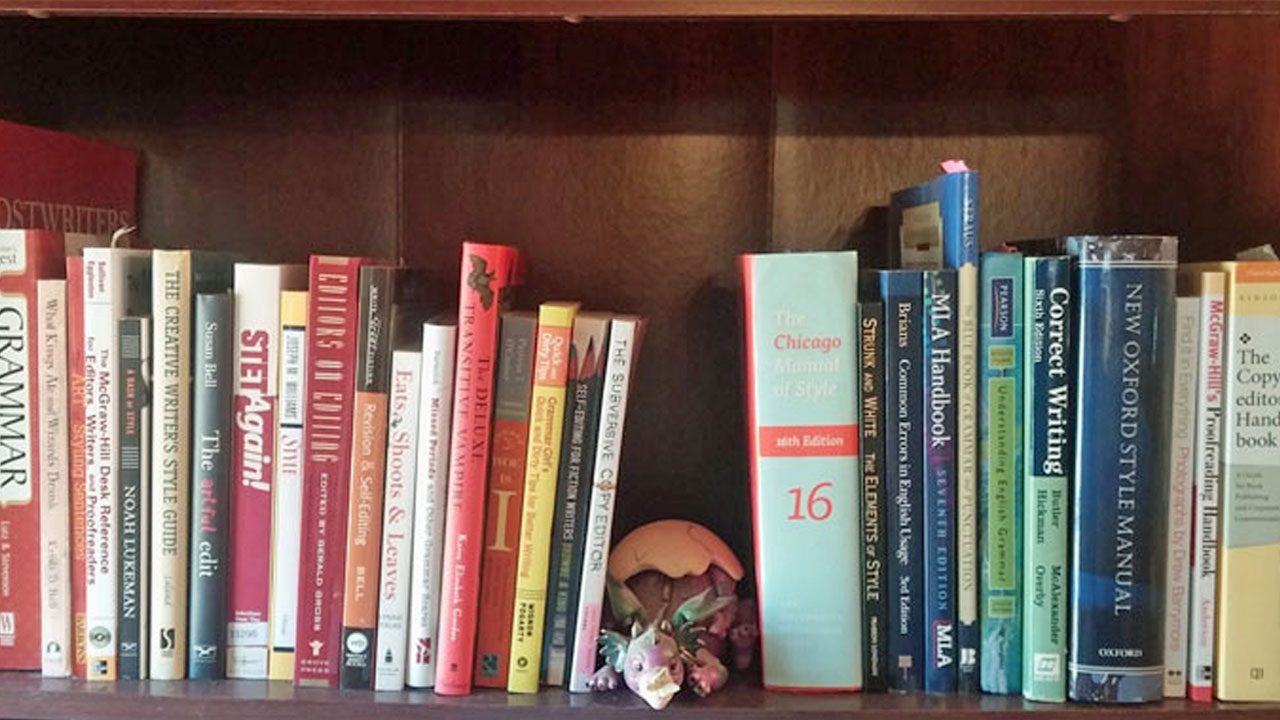 You may have wondered about the tools editors use. A dictionary is probably the first thing that comes to mind. But which one? A grammar book, probably. Although, again, which one? There are tons of books out there for just about every grammatical and craft question you can imagine. But there are two main references that are used for every project from large to small. And those two references are a dictionary and what’s called a style guide. In addition to those are some less-used references, and I’ll talk about them too.

I use The Chicago Manual of Style, 17th Edition for American novels and texts. AP Style is used by some editors, but it’s primarily used in periodicals.

The New Oxford Style Manual is Chicago’s counterpart for books that will be adhering to British English. In addition to the style guide, it also contains a fairly basic dictionary.

And that brings us to dictionaries.

I really wish Merriam-Webster had a little widget that recorded how many words you look up in a given day, week, month, the year. That would be awesome! But I digress. For books edited to an American audience, I use Merriam-Webster Collegiate, the subscription version. The subscription gets you the latest version of the Collegiate, Unabridged, French, Spanish, and Medical dictionaries, as well as their thesaurus (more on thesaurus choices in a bit). The main difference in the paid version and free version is that the free version is the previous edition–if the most current edition is the 11th edition, then the free online dictionary would be the 10th edition.

For books localized for a UK audience, I use Oxford Dictionary. A quick note about that—even though they list “US spellings,” Oxford is, at heart, a British dictionary.

Why do editors choose the guides they do?

The short answer is because it’s the industry standard. Undoubtedly the big publishing houses chose to go with Chicago due to its robustness–it’s over one thousand pages and covers almost any question about style you might have and a fair many about grammar as well. Why reinvent the wheel? Most publishers have instead chosen to go with Chicago for the most part and use shorter supplements for exceptions or for terms that are specific to a particular book or series.

As a quick note, while the Associated Press Style Book is a great style guide, it’s primarily for periodicals or other publications where print space is a premium. I would not recommend it for editing books, be they fiction, nonfiction, or textbooks.

A thesaurus: A thesaurus is great if you feel like you’re overusing a particular word. Another thing it’s great for is when you’ve got a word on the tip of your tongue but you can’t quite think of it. It’s almost like enraged, but more… whatever. A thesaurus is also a great way to just explore words. 🙂 Personally, I like Thesaurus.com for the way it links words.

Conjugating verbs: Conjugating verbs can be a complete pain. Especially that pesky lay / lie conundrum. Rather than reciting sink / sank / sunk, you can head over to The Conjugation.com. You can still ponder whether it’s slink / slank / slunk (it’s not 🙂 ), but this site will help immensely. And yes, the info is available in any decent dictionary, but I like the layout of this site.

A usage guide: You may wonder what the difference is between a usage guide and a dictionary. A dictionary is primarily descriptive, which means it records how people use language. That does not necessarily mean that a word is correct. Take irregardless, for instance. It’s listed in the dictionary and therefore, contrary to what some people would argue, it’s a real word. That doesn’t necessarily mean that it’s correct, however, and most dictionaries will have a note like “nonstandard” next to that particular entry. A usage guide, on the other hand, will have entries that discuss the difference between economic and economical, as an example. Fun times. 😉 So, there are two usage guides I’d recommend for American usage.

Garner’s Modern American Usage—Garner’s is the classic. The quintessential doorstop, this has just about everything in it you could possibly hope to find regarding usage.

Common Errors in English Usage: Third Edition—Common Errors is a another great usage guide. While not as robust as Garner’s, it covers some of the most common errors. You can also find it free online.

As you can see by my bookshelf, there are a lot more resources I have on hand, but those are my essentials. What are some of your go-to references? Let me know down in the comments. 🙂